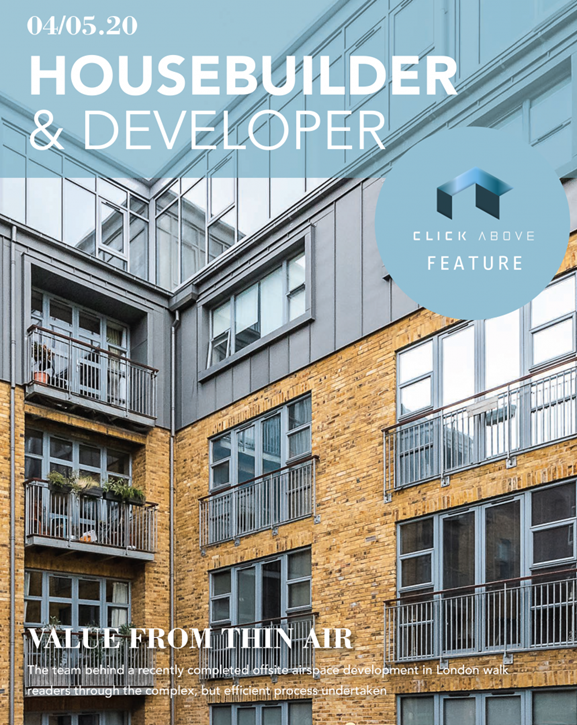 "In a world where major cities suffer from a scarcity of available land for development, Corben Mews is a tangible solution to the housing shortage, where there’s simply not enough land on which to build,” so says Anthony Moubarak, head of sales, marketing and communications at modular airspace developer Click Above. Located just off of the Wandsworth Road in the Vauxhall, Nine Elms & Battersea (VNEB) regeneration area of London, Corben Mews is the location for Click Above’s latest airspace development, where the team have developed two luxury penthouse apartments atop an existing four-storey residential block in a gated development. Utilising offsite modular construction and specialised airspace development techniques, the team carried out the physical installation process over a single weekend – with the majority of the construction process taking place at an offsite facility. Additionally, important upgrade works to the existing homes were delivered, including improvements to the communal stairwells and a reinforced and improved roof.

When the team first found the site, Corben Mews was reportedly already “sought-after,” being in a popular area. According to the developer, however, the focus on local regeneration meant that demand for homes was under increased strain, and with a lack of ground-level land on which to develop on, “the solution soon became clear – the airspace.” Click Above purchased the airspace above the existing Corben Mews building with planning permission already in place. The team were however required to make a number of “small planning adjustments” to allow for aspects of the modular construction used. “In effect,” explains Moubarak, “we were our own client handling every aspect of the build from acquisition, through the establishment of our own facility, build and installation, and the eventual completion and delivery.” In terms of sale, “the appeal of the area is clear,” Moubarak notes – he lists a new underground station at Nine Elms which is due to open in 2021 as part of the Northern Line extension, and Apple’s plans to move into the redeveloped Battersea Power Station around the same time, as just a few of the area’s draws. While Click Above were the designer and main contractor of the project, in order to be able to develop in this way, it was necessary to partner with some key players, including Evolusion Innovation (Module Designer); Michael Barclay Partnership (Structural Engineers), and H+H Fire Consultants.

As discussed, the penthouses at Corben Mews were built offsite using the “very latest modular innovations.” This allowed the structure to be especially lightweight – being approximately a third lighter than a traditional timber frame building – due to a combination of the main steel structure and the fibreboard external lining. Moubarak says that the additions being built in a factory environment “ensures quality assurance is tested not only to withstand the demands of a traditional build, but also the stress of transportation and craning onto foundations.” As such, each component was inspected at every phase and approved by third-party inspectors, complying with precise certifications and building regulations. Work on the site itself was focused on stripping back the existing roof finishes, the installation of the relevant support structure in preparation for the installation, loading the modules on-site and then preparing the weather finishes between the existing structure and the new elements.

“From a developer’s perspective,” Anthony explains, “the modular approach means that there are noticeable time and cost benefits.” “Simply put,” he says, “offsite construction results in at least half, and often 60 per cent, time savings compared to a traditional build.” This reportedly directly impacts wider costs as well, with the template-based design allowing the team to be accurate with expenditure and avoid unplanned material or labour costs while avoiding waste. This predictability also avoids any “unprofessional renegotiations” mid-way through a project, and with less time on-site and a building that is quickly market-ready, Anthony believes that constructing a home in this way “can easily equate to a cost per square metre saving in the region of £200.” He adds: “Time and cost savings don’t, however, impact negatively on standards – far from it. A factory environment ensures quality assurance is tested not only to withstand the demands of a traditional build, but also the stress of transportation and craning onto foundations.”

Developing in airspace and utilising modern methods of construction did however mean that special consideration needed to be paid to the logistics. Road closures, over-sailing during the crane lift, specialist structural surveys of the existing building and preparation of the roof to be developed on – all were vital steps and meant that it was a concept that required dedicated specialists. The developer found it reassuring however that the existing tenants at Corben Mews were all surprised at “just how easily the extension” was delivered. According to Anthony, one resident commented: “The build caused minimal impact to the residents and was much less painful than first imagined. I was impressed by the process and how quickly the new apartments were craned on – the place was kept clean and tidy and there were no major issues.” While the impact of the works undertaken appears to have had little affected the existing residents in terms of disturbance during the construction process, improvements were in fact introduced to bring benefits to them instead. These improvements have included refurbishment of the communal stairwells, a new secure two-tier cycle store and, of course, a new roof. The addition of the new units also has the potential to reduce the management fees to the existing residents by virtue of more revenue to cover the costs.

Now finished, the penthouses reflect contemporary design with high-end finishes, dressed to demonstrate everyday living comfort. The architectural style combines the look of the existing building with a zinc finish and, “the hallmark of luxury penthouses,” namely floor to ceiling windows. “The two penthouses that we’ve developed at Corben Mews are truly impressive homes that kick into touch any preconceived notions of ‘prefabrication’ equalling ‘boxy’ or ‘sub-standard,’” comments Anthony. Apartment 17 is 84 m2, and offers two bedrooms and two bathrooms (one of which is en-suite), while Apartment 18 is slightly smaller at 82 m2 and also offers two bedrooms. Both the penthouse apartments offer luxury kitchens, with integrated branded appliances and stylish contemporary fixtures and fittings, designer bathrooms and Juliet balconies. Some other important features include skirting heating, air source heat pumps, solar reflective glass, a mist sprinkler system, WiFi-enabled smart controls for heating and kitchen appliances, and winter gardens to bring the external space inside. According to the developer, people who’ve visited Corben Mews particularly comment on how light and spacious the apartments are – the windows, in particular, allowing plenty of sunshine in and making the spaces feel “airy.” Open plan living and dining areas were also included to be in keeping with the needs and demands of the young professionals and investors, who are the target market for these homes. Alongside these features, Moubarak says that “penthouse homes usually have one thing in common: fantastic views – the homes we’ve delivered at Corben Mews are no different, and so it was important to ensure these views were integral in the overall design.” Aside from this, when discussing the energy efficiency of the project, Moubarak tells me that the “very fact that the homes we have built at Corben Mews were manufactured offsite means that the development had less environmental impact than a traditional build, which would have taken far longer.” The units also meet and exceed both soundproofing and insulation standards, and, assisted by being on the top floor, they have impressive thermal qualities, minimising the need to heat the apartments.

VALUE OUT OF THIN AIR

In order to achieve all this, Anthony tells me that Click Above has invested in R&D for almost a decade to ensure its offer is viable and can be delivered. He says: “Corben Mews is evidence that it can, and the project has attracted a huge amount of interest and feedback from a variety of audiences. We pride ourselves on specialist bespoke solutions, developing airspace above buildings that may not be considered, and believe this sets us apart in the market.” He also believes that for freeholders and building owners, the company has demonstrated how airspace development can “quite literally increase the value of their asset and generate income from air.” “Additionally,” he adds, “Corben Mews is a tangible example to these audiences of how additional accommodation can be delivered when there’s seemingly no space on which to do so, and it has also provided evidence of how the appearance and facilities of the existing building can be enhanced through a development of this kind.” Click Above offers free evaluations of the airspace above their investments, and enquiries of this nature can be managed via its website. The developer has also drawn the attention of several local London Boroughs looking to increase their housing supply without having to look for traditional land for development. He says: “These are conversations which we are now actively developing, and we’re able to utilise Corben Mews as a positive example of how offsite constructions methods and airspace development can offer solutions to the housing shortage, through well thought out design.” “Finally, but importantly,” Moubarak concludes, “these penthouses don’t just serve as an exemplar of airspace development in practice, they are real homes which are now available for sale and they’ve already attracted significant levels of interest from both young professionals and investors alike.”