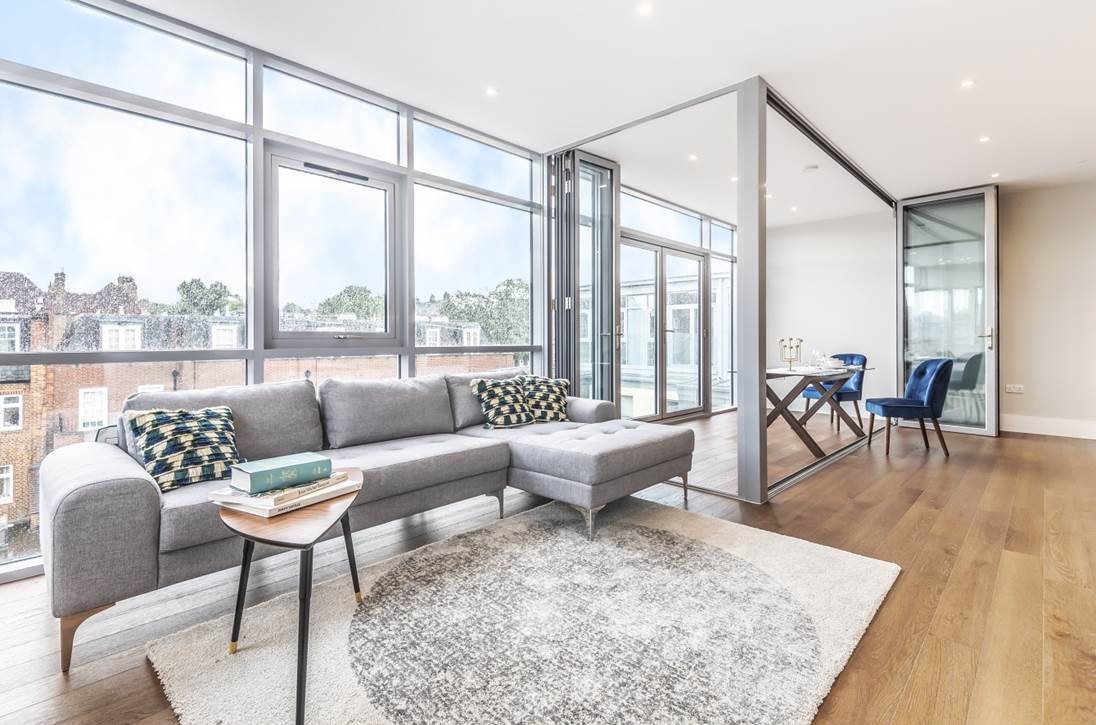 PHPD reports on an ‘airspace’ development in central London, where Click Above added two penthouse apartments to an existing three-storey building.

Airspace development – where additional properties are added above existing buildings – is becoming more common in many of the UK’s urban centres. Proponents believe it provides an opportunity to bring more homes to urban areas, with minimal disruption.

One such site is in the Vauxhall, Nine Elms & Battersea (VNEB) regeneration area of London, where airspace developer Click Above has recently offered two luxury penthouse apartments. The new homes have been built atop an existing three-story development of 16 apartments which form an exclusive gated community, known as Corben Mews, just off the Wandsworth Road.

Located on the fourth floor, the two penthouses boast views of the London skyline and have been finished to a very high standard with versatile and adaptable features – including bi-folding floor-to-ceiling glass doors to maximise the view. Fully equipped kitchens – with integrated branded appliances and stylish contemporary fixtures and fittings – as well as designer bathrooms with underfloor heating, all feature in the new apartments.

The single-storey extension was added to the existing building thanks to off-site, modern methods of construction that allowed for most of the build to take place in Click Above’s own workshop. The units were then lowered in to place by cranes over a single weekend.

As part of the project, a range of upgrade works, including refurbishment of the communal stairwells, has been completed to ensure that the existing tenants benefit from the enlargement of the development.

Click Above, Managing Director Aaron Emmett, commented: “An already densely-developed city such as London often struggles to meet demand for new housing, yet the solution is there in plain sight: airspace. Whilst the UK has traditionally lagged behind many other international markets in its adoption of developing the airspace above existing buildings, what we’ve achieved here at Corben Mews and the interest which has been received from international investors, demonstrates the valuable – indeed vital – contribution this approach to housing can bring to stock levels.”

Click Above purchased the airspace above Corben Mews with planning permission already in place, but was required to make a number of small adjustments to allow for modular construction that was used for the new penthouses.

Aaron explained some of the nuances of this approach to housing delivery: “Developing in the airspace and utilising modern methods of off-site construction mean that special consideration needs to be paid to the logistics of any such project. Road closures, over-sailing during the crane lift, specialist structural surveys of the existing building and preparation of the roof to be developed on, are all vital steps and mean that this is a concept that requires dedicated specialists.”

An exclusive time-lapse video is available showing the process from offsite construction through to the finishing touches.

Aaron concluded: “When carried out properly it really can appear to be a straight-forward concept. Indeed, the existing tenants at Corben Mews have all been surprised at just how easily the extension was delivered.”